Shri V. V. Bhat, lovingly and respectably called Bhat Sir, was born in 1930 in a small village near Udupi in Mangalore, Karnataka. The Bhats were a respectable family of educationists, known in those parts for their school, the Kadiyali Higher Primary School and Gundibail school, the latter of which was literally built by the family with their own hands.

Academics ran in the ancestral roots of the Bhat family. He went on to complete his graduation and post-graduation at the prestigious University of Mysore, and then came the time when he had to chart a career path for himself.

As a student, Bhat Sir showed an inclination towards academics, which was  ingrained in him from his family atmosphere. His flair to lead by example was well-known. Both these traits came in handy when he chose his profession of teaching.

Bhat Sir had a yearning in him to take his talents to a bigger stage. Kadiyali was but a small village and there were few students that he could reach out to. For this reason and to further his own career pursuits, Bhat Sir moved to Mumbai, then known as Bombay, in the year 1958.

With his brilliant credentials, it did not take long for Bhat Sir to get a teaching position in Bombay, which was at that time a nascent city. This was a bigger city nonetheless, and he had to start his career all over again. He began with the post of Assistant Teacher at the NKES School in Wadala. Here again, he wowed his superiors with his dedication to his work. In a few years, he moved on to become the Principal of the Kannada Night High School.

Just seven years after moving to Bombay, Bhat Sir caught the eye of the Education Department of the Brihanmumbai Municipal Corporation (BMC). In 1965, due to his diligence at work and his acute understanding of the field of education, Bhat Sir was appointed as an Inspector of Education for private primary schools by the BMC.

It was during his tenure as the Inspector of Education that Bhat Sir became closely acquainted with the educational trends of that time. He got the opportunity to visit several schools around the city and look closely at their pedagogy. He saw the many shortcomings that were not being addressed.

Bhat Sir had a vision of providing holistic and inclusive education to students. In those times, the only focus of educationists was on academics. But this did not lead to overall development of students. Bhat Sir saw this problem much before his contemporaries did, and thus was born a dream within him — the dream of establishing a school that would focus on all-round development of the younger generations.

Today, we all know that the dream took shape in the form of the Children’s Academy Group of Schools.

It was in 1970 that Bhat Sir saw his dream taking shape. In this year, he managed to rent out five shops in a residential building named Ishwar Bhavan in Malad, which was at that time a suburb of Mumbai. This first avatar of the Academy was quite a modest establishment. Children’s Academy took birth in these humble premises in the suburb of Malad.

It did not take long for Children’s Academy to grow in number of students as well. What was a trickle of students in the first few years soon grew to a significant number with an increasing number of parents vying to send their wards to the Academy with each passing year.

We cannot imagine how elated Bhat Sir and Madam Bhat might have felt when they saw their first SSC batch passing out from the Academy in 1976. This was the fulfilment of long-harboured dreams, a labour of sweat and love. Their successful results brought in a much greater sense of satisfaction.

Soon the demand for the school grew and the five rented rooms wouldn’t suffice. Over a period of time,Bhat sir rented and occupied all 20 of the rooms in Ishwar Bhavan.

In April 1979, Bhat Sir purchased a plot of land in the Bachani Nagar area of Malad (East), where he hoped to soon begin the construction of the new school building. He envisioned this building to be a concrete structure that would be eventually equipped with state-of-the-art amenities for students to have a holistic education in.

However, this journey didn’t promise to be easy. Though he had the land, there were various clearances required according to the State Government stipulations. He faced a lot of hurdles in getting these clearances. But the need for additional space was critical as the number of students was growing. To accommodate those, Bhat Sir decided to have a temporary barracks-like structure built on his plot where the classes would take place. This was supposed to be a temporary provision till the actual school building was erected.

However, a few months down the line, Bhat Sir had to face an unexpected challenge. The jolt came from the offices of Brihanmumbai Municipal Corporation (BMC), who decreed that there was no permission taken to construct the structure. The BMC officials lost no time in showing up at the site and razing the structure down.

As Bhat Sir and Madam Bhat saw the debris of their dreams, they realised the major crisis that had befallen them. While most would be dejected on facing such a loss, this only led to Bhat sir redoubling his efforts and strengthened his resolve to build his dream.

Notwithstanding the fact that this was a severely debilitating impediment, Bhat Sir and his team did not allow it to stop them. He spent nights rectifying the situation, and then left no stone unturned to approach the authorities and do everything that needed to be done.

After receiving the requisite permissions from the municipal authorities, Bhat Sir started work on the construction of the school building. This could happen in 1986, and with the kind support and guidance of the MLA of that time, Mr. Chandrakant Gosalia. Seven precious years had been lost, and Bhat Sir lost no time in getting the building to take the shape he had envisioned.

Since there was no place to house the growing students any longer, Bhat Sir decided to build the school structure in such a way that students could move into the finished classrooms even as the construction work happened on the upper floors. During this phase, the parents of our students avowed their unconditional support to the management. We are also obliged to the teachers of those years who did not let the uncomfortable classroom conditions impair their teaching in any way. By 1987, students were partially moved into the new swanky classrooms of Children’s Academy, Malad. It was a moment of exhilaration for each and every person who had attached themselves with Bhat Sir’s dreams for all those years.

Meanwhile, as Children’s Academy became a household name, there was a growing demand from the parents of the nearby suburbs as well. Parents from the adjacent suburb of Kandivali used to send their children even to that modest Malad structure. Bhat Sir saw this as a growing need. This gave birth to the idea of having a branch of Children’s Academy in Kandivali itself. He started working steadfastly in this direction, and in the year 1988, he bought a piece of land in Ashok Nagar, Kandivali East, where he planned to house the Kandivali branch.To fulfil the demand of the parents of the neighbouring suburb of Kandivali, Bhat Sir purchased a plot of land in Ashok Nagar in 1988, where he planned to house the Kandivali Branch.

The same ideals that were used to raise the Malad branch were now energising the growing staff and students of this new branch. Soon, this branch was also brimming with students and despite some competition in the area, it became a force to reckon with.

The demand continued to grow at Kandivali. In just a few years, the school at Ashok Nagar was not enough to cope with the ever-increasing number of enquiries for admissions hence the Bhat Family decided to acquire a new property in the growing locality of Thakur Complex. Thus, Children’s Academy, Thakur Complex, began its operations in 2001.

With three fully-functional schools, Children’s Academy had now become a formidable force. None of this would have been possible without the many hands that shaped us. However, we were modest about our achievements, knowing fully well that with greater powers come greater responsibilities.

The first chapter of the Children’s Academy Group of Schools could not have been written if it wasn’t for the unflinching support of Bhat Sir’s wife, Madam E. V. Bhat. In her, Bhat Sir found the right life-partner who was by his side, not only in his happy times but also through all the challenges that came their way. 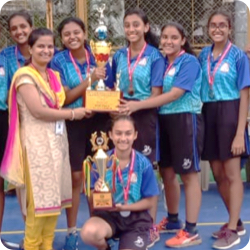 Madam Bhat could understand Bhat Sir’s dreams well as she herself was a teacher. She was fully aligned with the vision of providing holistic education for the students of their generation. Soon, her husband’s dream became her dream as well, and the two of them became a collective force. In the initial years, when the foundation of the school was wavering due to daunting financial challenges, Madam Bhat did not even bat an eyelid to contribute her jewellery towards the noble cause. For her, such things were trivial; what was more important to her was the materialisation of the school they had envisioned.

While Bhat Sir was working laboriously to keep the school running, Madam Bhat did all she could to manage the growing household. She left no stone unturned in providing utmost care for their three children, while also providing her husband the much-needed emotional support. Along with all this, she would also visit the school to be the mentor, philosopher, and guide that the growing staff of the school needed. She evolved into a person who was held in high esteem by everyone at the Academy, gaining each day in admiration and adulation. 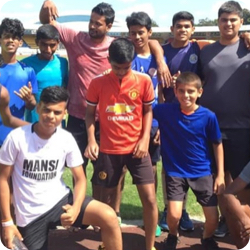 What makes us admire Madam Bhat the most is that, along with all her domestic responsibilities and the time she devoted to the Academy, she carved out a space for herself as well. She had her own identity as she worked for HES Limited, a Czechoslovakian clock-manufacturing company for 25 years.

It would be a gross understatement to say that Madam Bhat merely helped in building the school, for she was much more than that. Over the years, she became synonymous with the school, completely devoting her life to its functioning and growth.

Children’s Academy Group of Schools, is a vision and mission-led educational institution, imbibed by traditional value based approach and interwoven with progressive learning.

About Us
Our Campuses and Policies
Admissions
Academics
Our Differentiators

Any cookies that may not be particularly necessary for the website to function and is used specifically to collect user personal data via analytics, ads, other embedded contents are termed as non-necessary cookies. It is mandatory to procure user consent prior to running these cookies on your website.